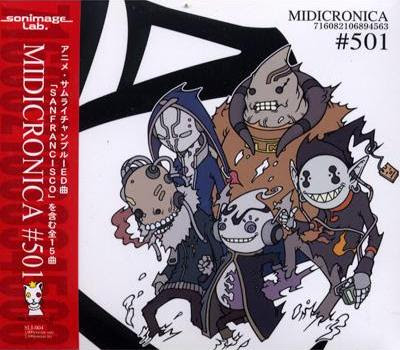 #501 - Been listening to this album recently and their songs have been topping my playlist. Famous for their hit song "San Francisco" of Samurai Champloo anime, this Jap Hip Hop group churns out "Good smell music" which is a fusion type of genre and shares visual resemblance to Gorillaz. Their story is made up life forms No716, No894, No181 and No563 which are created by experiment of Steroid-Lostnumbers Laboratory in a certain world. They were sent to collect information of the real world and they somehow managed to communicate with human by music in a deserted building. Every night, weird music was heard from the building where no one is sure to live and people started to call that building Freak's Mansion. Well sounds a little lame but what matters is the music that I've been listening to and they have been great so far with mixtape type of pattern but sounds better than those mixtapes available for download. If you're into N.E.R.D or M-Flo, they are another gem to be discovered. Click here for their official site and here for their MySpace corner.
1 Operator To Help You ～ G
2 Blue Velvet
3 Jet Set Radio
4 楽しいドライブ
5 Star Diva (Featuring 893 aka La Melomania)
6 Lost Highway (Featuring 601 Aka 和田（アルファ）)
7 Skit
8 San Francisco
9 Pillow Jam
10 Steroid
11 Kido (Featuring 967 aka Gumuna)
12 Islam Radio (Featuring 343 aka Dj Shunsuke)
13 S501
14 Deep Blue (Featuring Con-NYC)
Posted by 18htn at 12:59 AM