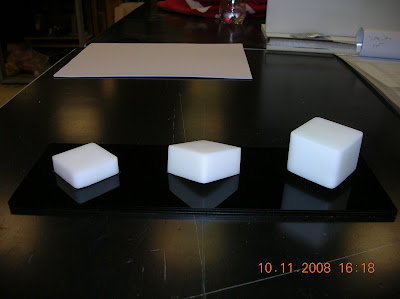 Ice on Water - The concept struck me when I was observing the movement of ice cubes in my drink and I was rather taken aback by how it could translate into functional buttons in a very impactful yet subtle way. Through my buttons, I attempt to question the impact of our daily lives on global warming. The final product came out pretty well with the use of delrin (polyoxymethylene plastic) for my buttons and acrylic for my platform. Love how the buttons are reflected on the platform with some play of the gaps between the buttons and platform. From the left, the button is made to be pressed which represents the gradual sinkage of ice into water. The middle button is a revolutionary button which is cut at a certain angle to allow the button to be tilted and engages the finger to naturally tap it down like the movement of ice when it starts to melt and rock on water. Two fingers could be used to operate it like a see-saw motion too. The last button is given a generous amount of volume and lifted slightly from the platform to invite the hand to grab the button and turn it just like how ice floats and swirls on water. My buttons are imagined to be used in designer kitchens and exquisite Jacuzzis which have an element of fluid in both context. In terms of forms, my buttons not only resembles ice cubes but also resembles Kubuswoning (Cubic Houses) in Rotterdam, The Netherlands by Piet Blorn in 1984, black and white tile works and sugar cubes. Lastly, my buttons are geometric like the sculpture "Geometric Progression" by Guy Ngan and have a spirit of submergence. This was an extremely interesting and gruelling exercise in terms of the amount of time and effort spent to generate the buttons and panels because buttons could be seen as the fundamentals of product design concepts and the countless consultations with the tutors. The concepts adopted were also given plenty of freedom as long as they are proven to be able to work at the end of the day. Lesson learnt could be the discovery of a new material in terms of delrin, the exploration of Toh Guan Industrial Estate, the finishing methods for delrin, the control of forms and shapes by just minimal changes, the meaning behind button conceptions with the use of platforms and position of the buttons, the quote "when in doubt, keep it simple", the details involved in technical drawing and the types of layout to be used during presentation. A stepping stone definitely. 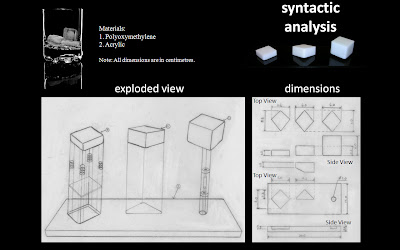 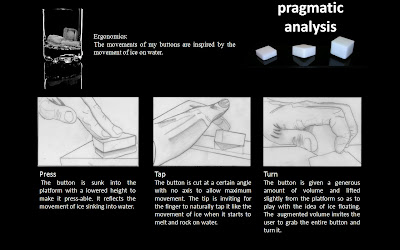 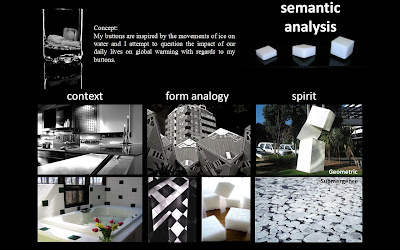