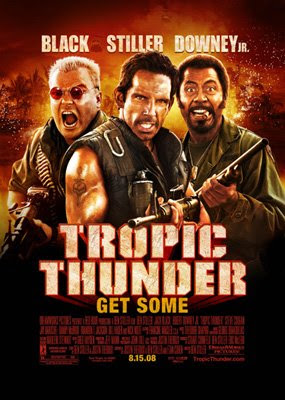 Synopsis - A group of self-absorbed actors set out to make the most expensive war film. But after ballooning costs force the studio to cancel the movie, the frustrated director refuses to stop shooting, leading his cast into the jungles of Southeast Asia, where they encounter real bad guys.
Review - Great action comedy about Hollywood action films with the awesome introduction of cheesy trailers. Love the taglines and how each character unfolds themselves over the film. I felt that Robert Downey Jr did an excellent job in portraying his character with some hilarious features from Tom Cruise. Watch out for cameos of certain Hollywood stars so sit back and GET SOME!
Posted by 18htn at 5:00 PM