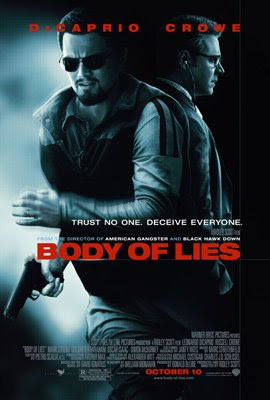 Synopsis - A CIA operative, Roger Ferris, uncovers a lead on a major terrorist leader suspected to be operating out of Jordan. When Ferris devises a plan to infiltrate his network, he must first win the backing of cunning CIA veteran Ed Hoffman and the collegial, but perhaps suspect, head of Jordanian intelligence. Although ostensibly his allies, Ferris questions how far he can really trust these men without putting his entire operation--and his life--on the line.
Review - Finally got to watch this flick about terrorism and you can bet your money that DiCaprio and Crowe did an excellent job to make this movie a watchable one. Love the constant contrast between DiCaprio's character and Crowe's. DiCaprio's out there bleeding to get bits of vital information in the Middle East while Crowe's running family chores like a typical American Father and both stay contacted via mobile. Its interesting to see how DiCaprio's character goes out to earn trust and betray it under constant deception from both parties. Like what Crowe's character kept telling DiCaprio's "nobody's innocent in this shit", before you put that blame on someone, ask yourself are you at fault too. Great film but the ending could have been much better.
Posted by 18htn at 9:29 PM