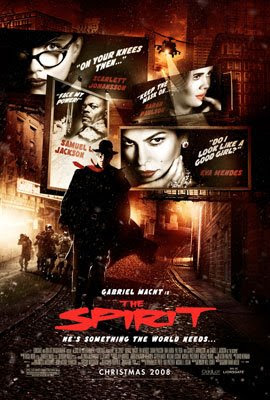 Synopsis - Adapted from the Will Eisner's graphic novels, "The Spirit" tells the story of a man who fakes his own death and fights crime from the shadows of Central City. The Octopus -- who kills anyone unfortunate enough to see his face -- has other plans. He's going to wipe out the entire city. The Spirit tracks this coldhearted killer from the city's rundown warehouses, to the damp catacombs, to the windswept waterfront...all the while facing a bevy of beautiful women who either want to seduce, love or kill the masked crusader.
Review - If you like Sin City and graphic novels, this is the movie for you. Black and white. Cheesy dialogues. Lame antics. Cool soundtrack. Bad plot. Hot babes. Like what they say "Silken Floss (Scarlett Johansson) is the most beautiful woman in the world", I couldn't agree more haha. No matter how much skin Eva Mendes sheds, there's still a clear winner. Love the cinematography, its as though you are watching a graphic novel coming to life. However, the acting and plot could have been much much better. On the whole, the spirit is a pretty boy who has kick ass fashion sense (fedora hats, red tie and sneakers, that white sole sneaker was the bomb in the black and white backdrop) and a sweet tongue for the ladies. Samuel L. Jackson also did pretty well for his role of the villain. Too bad the film was shot in a rather conservative way albeit a great visual input, looks good on trailer and in a music video but if its a movie, the hype was way low. Room for improvement though.
Posted by 18htn at 2:41 AM