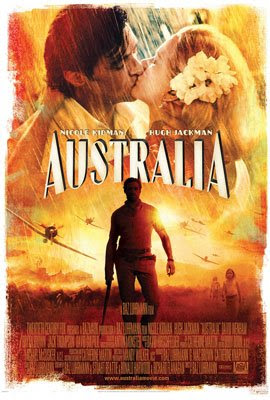 Synopsis - In Australia, on the brink of World War II, an English aristocrat travels to the faraway continent, where she meets a rough-hewn local and reluctantly agrees to join forces with him to save the land she inherited. Together, they embark upon a transforming journey across hundreds of miles of the world's most beautiful yet unforgiving terrain, only to still face the bombing of the city of Darwin by the Japanese forces that attacked Pearl Harbor.
Review - Wasn't really excited about watching this flick initially but gave it a shot nonetheless. Romance. War. Outback. Totally dig the contributions by the lead casts. Nicole Kidman was absolutely stunning with her wardrobe and looks. Flawless and I have fallen in love with her once again haha. Hugh Jackman on the other hand was what every guy aspired to be. His physique could be placed in Men's Health Outback version cover anytime. The acting was noticeable but the plot was not very encouraging. Fortunately, the input of other supporting casts were really entertaining and made the film come alive. Love the cinematography which was a little similar to Moulin Rouge and its a classic Hollywood drama movie with a little too much drama at times. Lots of issues were covered in this flick so open up your mind and eyes to Australia!
Posted by 18htn at 4:02 PM