Ponyo on the Cliff by the Sea 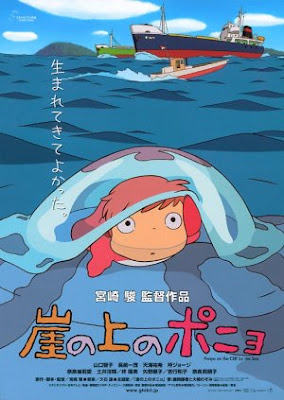 Synopsis - Centers on a 5-year-old boy named Sosuke and his relationship with a goldfish princess named Ponyo who longs to become human.

Review - Its Miyazaki and any animation by him can't go wrong. Awesome hand-drawn animation with lots of adorable scenes to capture kids' or ladies' attention. However I think the plot was rather too straightforward and the ending left me wanting more from Miyazaki. If you've seen Spirited Away, you should know what I mean. Still, this is something worth watching from Miyazaki with an excellent soundtrack to bring the movie to another level. His animations are pretty interesting with the use of hand drawn 2D effects albeit the plethora of 3D animations from Hollywood. The humane touch is very much implanted to his animations and like most movies in Japan, they feel close to what you are experiencing in real life but with a tint of fantasy injected into it. So before you shut your ears to that "Ponyo" song which is the hype right now, why not give Miyazaki a chance to show you what animation is all about.
Posted by 18htn at 2:37 AM