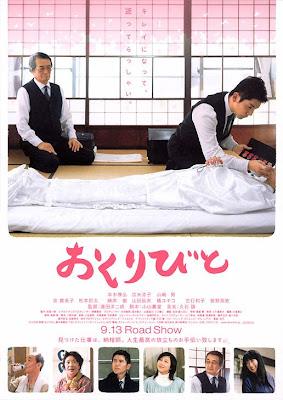 Synopsis - Daigo Kobayashi (Masahiro Motoki) is a devoted cellist in an orchestra that has just been dissolved and now finds himself without a job. Daigo decides to move back to his old hometown with his wife to look for work and start over. He answers a classified ad entitled "Departures" thinking it is an advertisement for a travel agency only to discover that the job is actually for a "Nokanshi" or "encoffineer," a funeral professional who prepares deceased bodies for burial and entry into the next life. While his wife and others despise the job, Daigo takes a certain pride in his work and begins to perfect the art of "Nokanshi," acting as a gentle gatekeeper between life and death, between the departed and the family of the departed. The film follows his profound and sometimes comical journey with death as he uncovers the wonder, joy and meaning of life and living.
Review - Okuri means sending off in terms of death and Okuribito means people who sends off the dead. If you watched Six Feet Under before, its the same concept minus the dysfunctional family and sex. The impact of the film is extremely powerful because it deals with life and death in the most beautiful manner one can imagine. Since not many would want to associate with the dead, doing a job that faces death 24/7 can be pretty taxing but self-fulfilling at the same time. Beneath the heavy theme there is also something extremely real in terms of job hopping in times of bad economy. The desperation of landing a job and choosing one which is not appealing initially is awfully true for many but going on the job and gradually finding the true meaning of it can be really inspiring. This I have to take my hat off Motoki who did a marvellous job in portraying his character of Daigo who is like a "little man" out to fulfil his musical dream but due to his own limitations and bad economy, he ended up jobless and having to become an Okuribito. The entire process of how he managed to sharpen his craft of Okuri is funny and realistic in many ways. The people he had to prepare for burial were also a true reflection of the importance and impact of his occupation. This is probably the best movie I've seen this year. Death has never been so beautiful.
Posted by 18htn at 2:32 AM