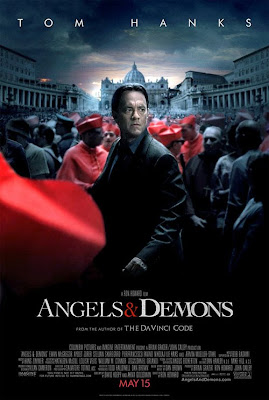 Synopsis - When Robert Langdon discovers evidence of the resurgence of an ancient secret brotherhood known as the Illuminati -- the most powerful underground organization in history -- he also faces a deadly threat to the existence of the secret organization's most despised enemy: the Catholic Church. When Langdon learns that the clock is ticking on an unstoppable Illuminati time bomb, he jets to Rome, where he joins forces with Vittoria Vetra, a beautiful and enigmatic Italian scientist. Embarking on a nonstop hunt through sealed crypts, dangerous catacombs, deserted cathedrals and even to the heart of the most secretive vault on earth, Langdon and Vetra will follow a 400-year-old trail of ancient symbols that mark the Vatican's only hope for survival.
Review - Its sure entertaining with all the religious issues being discussed in the movie as well as the wonderful artwork of Gian Lorenzo Bernini. Viscerally, it was a spectacle but I kind of felt that 2 hours wasn't enough for the movie to tell the whole story that it wanted. At times, it was too fast forwarded that it left me with more questions than answers. The twist was interesting nonetheless but if you've read the original novel before, you would feel that the movie's cover up job was pretty weak. Luckily, there was Ayelet Zurer who looked astonishingly like Nigella Lawson in the movie. Overall the movie looked good on the outside but lacked a certain motive or direction, it would have been a killer if there was no cover ups of the story (let it all out) and the movie would really create an impact. Go watch it if you haven't read the novel before because it would definitely raise interests in the topics heavily discussed in the movie but I suggest you stick to the original novel if you have read it before.
Posted by 18htn at 2:05 AM