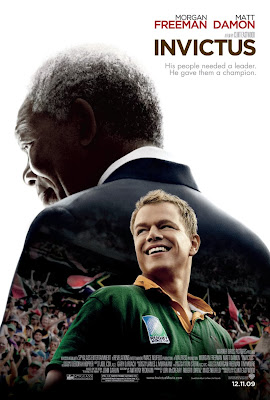 Synopsis - The true story of how Nelson Mandela joined forces with the captain of South Africa's rugby team, Francois Pienaar, to help unite their country. Newly elected President Mandela knows his nation remains racially and economically divided in the wake of apartheid. Believing he can bring his people together through the universal language of sport, Mandela rallies South Africa's underdog rugby team as they make an unlikely run to the 1995 World Cup Championship match.
Review - I'm very well aware of the great partnership between Morgan Freeman and Clint Eastwood. This is probably another result of their partnership. A story about politics and sports. Emotional at times but dull too at some point. The movie name was taken from a short poem by English poet William Ernest Henley and in actual fact, Nelson Mandela provided Francois Piennar an extract from Theodore Roosevelt's speech instead. So the connection of the name of the movie to the plot does not flow for me. A powerful movie but its impact has been heavily subdued.
Posted by 18htn at 4:16 PM

when will this movie release?
it's morgan's movie! and on top of that, it is about a true story.
can't wait to watch! ^^