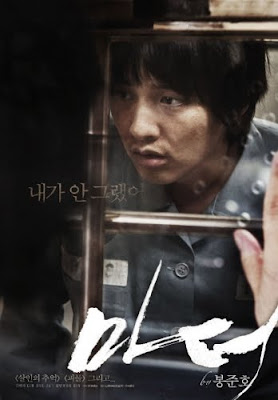 Synopsis - Hye-ja is a ginseng vendor and an unlicensed acupuncturist in a small town in southern South Korea. She dotes on her son, Do-joon, who is 27, unemployed, and mentally incapacitated on some level, which Hye-ja seems to ignore.

A high school girl is found dead on the roof of an abandoned building, and the local detectives arrest Do-joon based on circumstantial evidence. They coerce him to sign a confession and quickly imprison him. Hye-ja, distraught and convinced he is innocent, searches for the real killer, uncovering many secrets from the townspeople.

Review - A pretty good film about a mother's struggles with a mentally unstable son. Loved the simple touches the director introduce to the film together with the eventual murder in the movie. The twist is also pretty good but there were some questions which weren't answered in the film to my dismay. The R21 rating in Singapore was also a little harsh considering the amount of nudity in the movie. Great performance from Kim Hye-ja.
Posted by 18htn at 2:54 AM