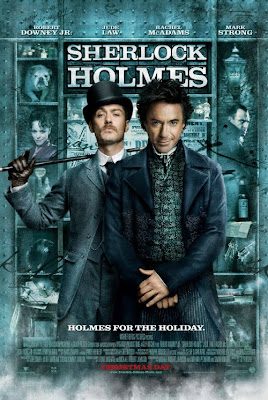 Synopsis - Robert Downey Jr. brings the legendary detective to life as he has never been portrayed before. Jude Law stars as Holmes' trusted colleague, Watson, a doctor and war veteran who is a formidable ally for Sherlock Holmes. Rachel McAdams stars as Irene Adler, the only woman ever to have bested Holmes and who has maintained a tempestuous relationship with the detective. Mark Strong stars as their mysterious new adversary, Blackwood. Kelly Reilly will play Watson's love interest, Mary.
Review - A different Holmes with more muscles packed in him. Delivered to my expectation because I know what Guy Ritchie was capable of. Love the cinematography and how the movie paved itself to its sequel. Very old school. The soundtrack was also a blast. Robert Downey Jr. has nailed another character. If you are expecting something more demure and classy, I think you might not fancy this one but if you are fine with some dirt and blood, this is something you might consider watching.
Posted by 18htn at 11:19 PM