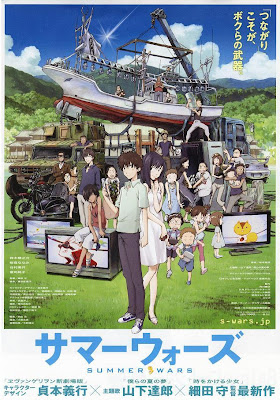 Synopsis - The story centers on high school student Kenji Koiso (Ryūnosuke Kamiki), a child prodigy in mathematics who spends his time immersed in OZ, a massive computer-simulated virtual reality world. Kenji is a genius with numbers but ill-adept socially. He secretly has a crush on his attractive upperclassman Natsuki Shinohara (Nanami Sakuraba) but does not have the courage to tell her. At the beginning of summer vacation, he is asked by Natsuki to help in celebrating her great-grandmother's 90th birthday. Although Kenji does not know the details of the plan, he agrees and goes with Natsuki to her grandmother's estate in Ueda, Nagano Prefecture. Much to Kenji's surprise, he is introduced at the Shinohara family house as Natsuki's fiancé.

As Kenji tries to act the part, meets Natsuki's dozens of relatives, and deals with the advances of computer expert Wabisuke Jinnouchi (Ayumu Saitō), Natsuki's uncle and "first love", he receives a mysterious e-mail with a mathematics code. He cracks the code and returns it to the sender but finds himself at the center of a developing news story the following day. Overnight, OZ has been hacked and turned into a digital deadzone, and he is the prime suspect. Using Kenji's account and avatar, the real "hacker", which is actually the advanced artificial intelligence system Love Machine, has stripped the virtual world empty and wreaks havoc in the real world. With car navigation systems disabled and computers malfunctioning, Japan grinds to a halt. Love Machine also gains control of a satellite and threatens to send it crashing into a nuclear power plant somewhere on Earth. In order to fight back, Kenji enlists the help of Wabisuke, Natsuki's family, and his best friend using an army of avatars. With the fate of the world at stake, a great online summer war takes place.
Review - An online summer war. Something which could happen in the future if terrorists and hackers combine forces. Talks about family values and togetherness as a whole. The drawing is also pretty impeccable, doesn't lose much to Miyazaki's great works. From the people who brought you "The girl who leapt through time", this is another masterpiece from them.
Posted by 18htn at 12:42 AM