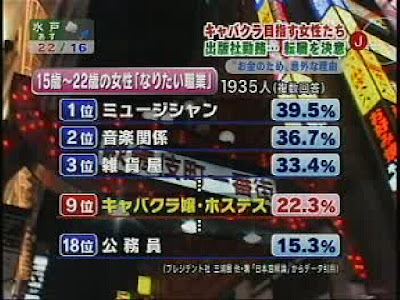 Nightclub Hostess - Sounds sleazy and all but still its a living and interestingly, Japan Probe mentioned in a recent survey that 22.3% of Japanese women between the ages of 15 and 22 wanted to become hostesses as their dream job. Reason being is rather obvious - cash money. The average hourly pay of a hostess is 4000 yen and at the end of the night, it could hit 250000 yen (that's 3,684.07 SGD!). Here's an interesting video from Asahi TV which features Momoka, a popular hostess, who is one of the many young women who becomes a nightclub hostess to pursue their dreams. The peek into her life is rather interesting as its not what you would expect of a popular nightclub hostess. Not exactly the best job in the world unless you like entertaining half drunk working adult losers and end up having your cleavage gawked at all night. Man this makes me feel like going over to Japan to show Momoka some of my TLC. How about AV stars and gravure idols?